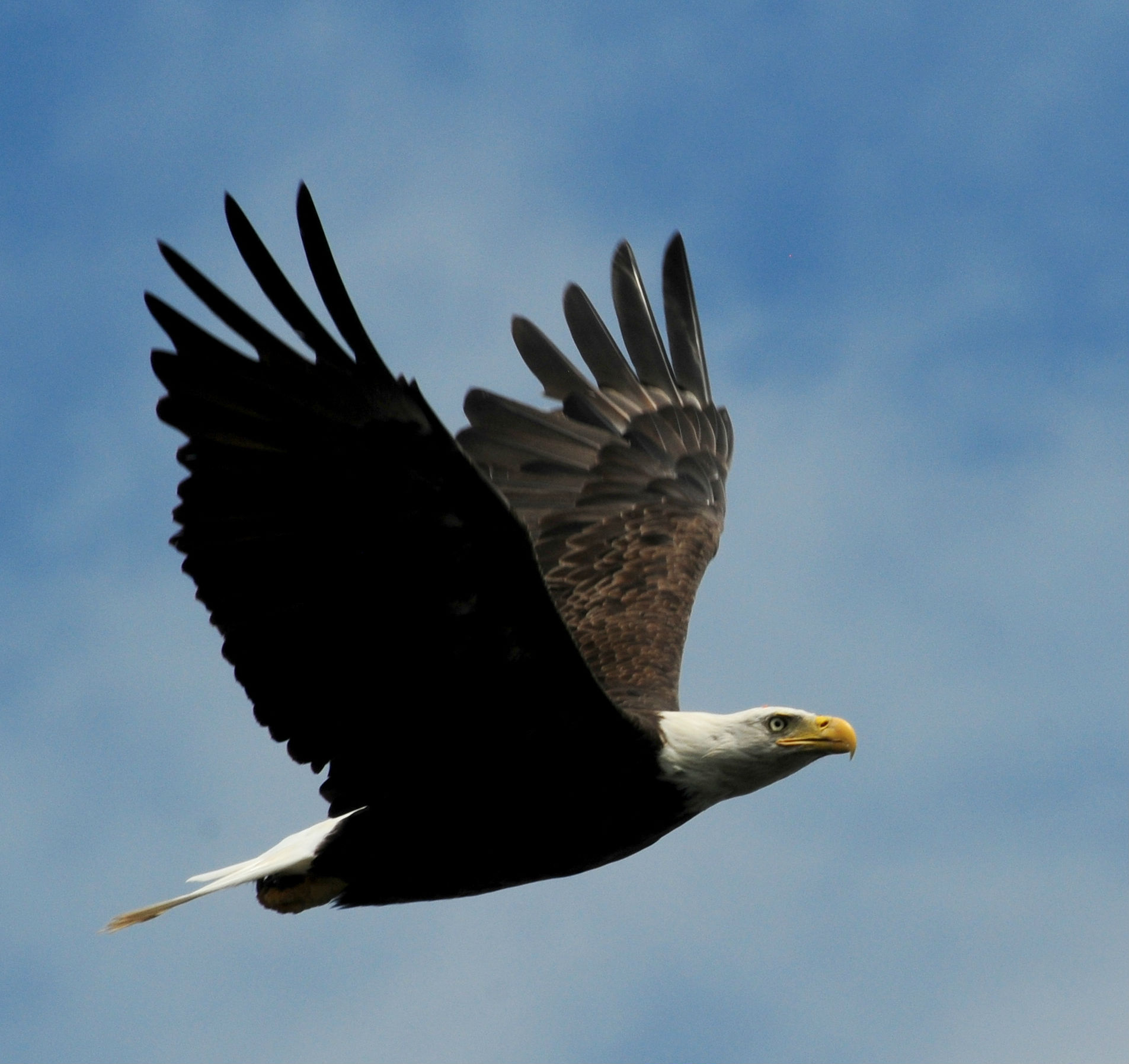 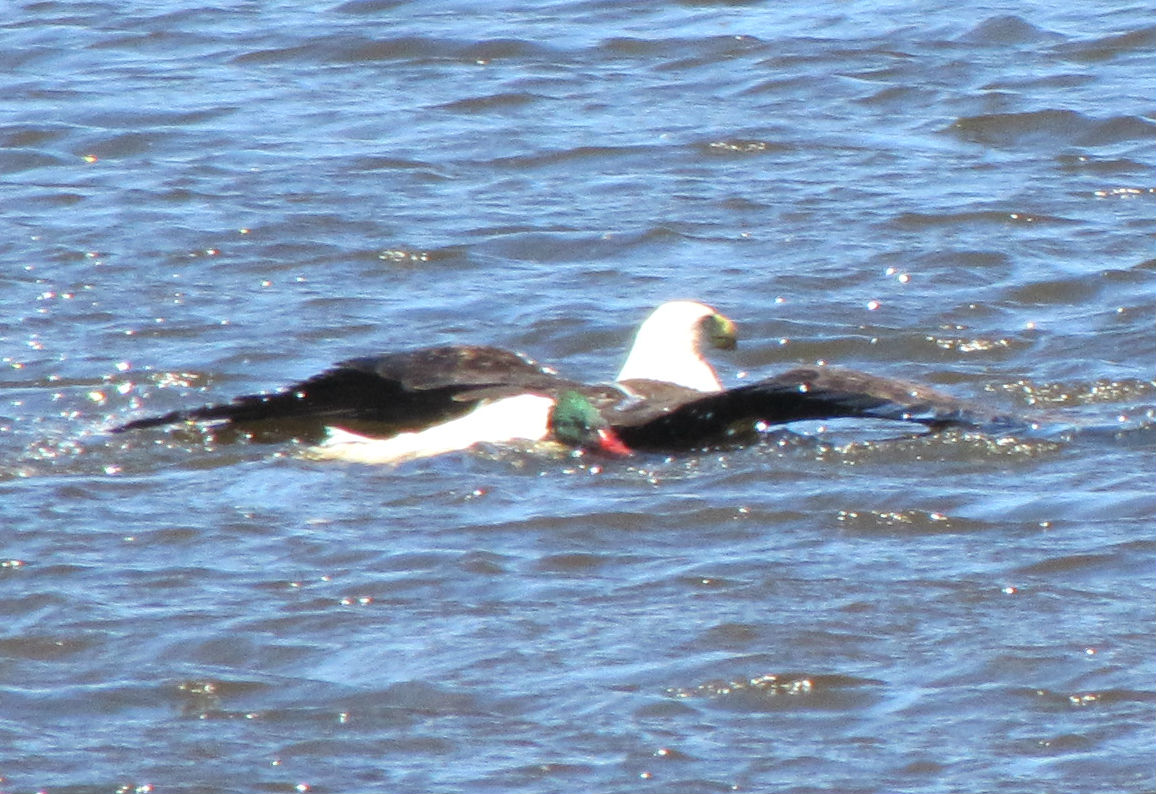 An adult bald eagle catches an adult common merganser and "swims" with it to an island, Greg McClellan/USFWS. 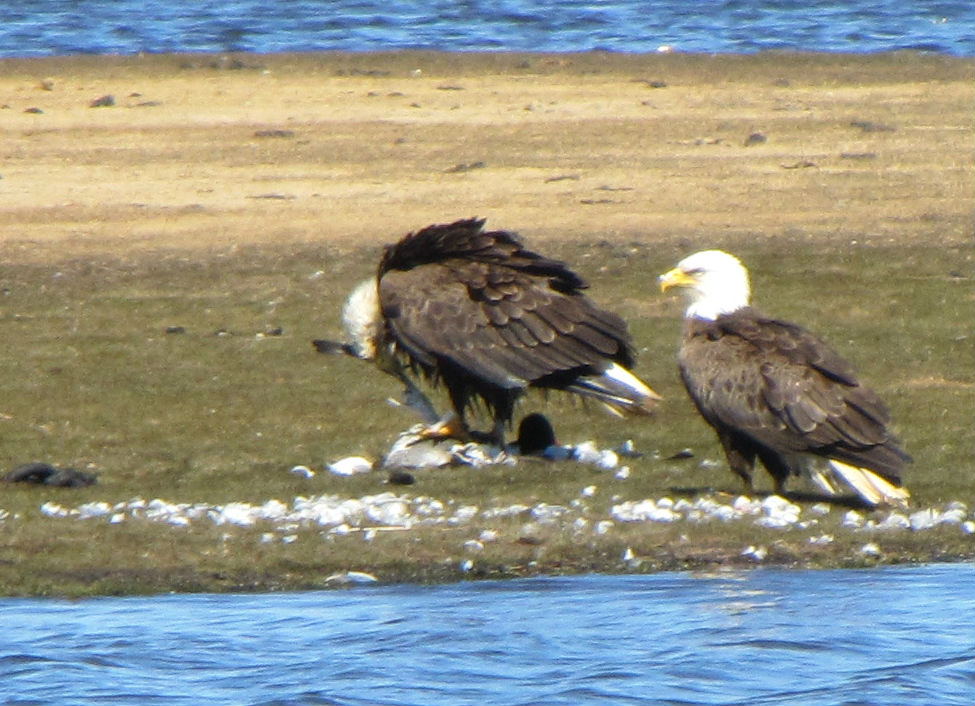 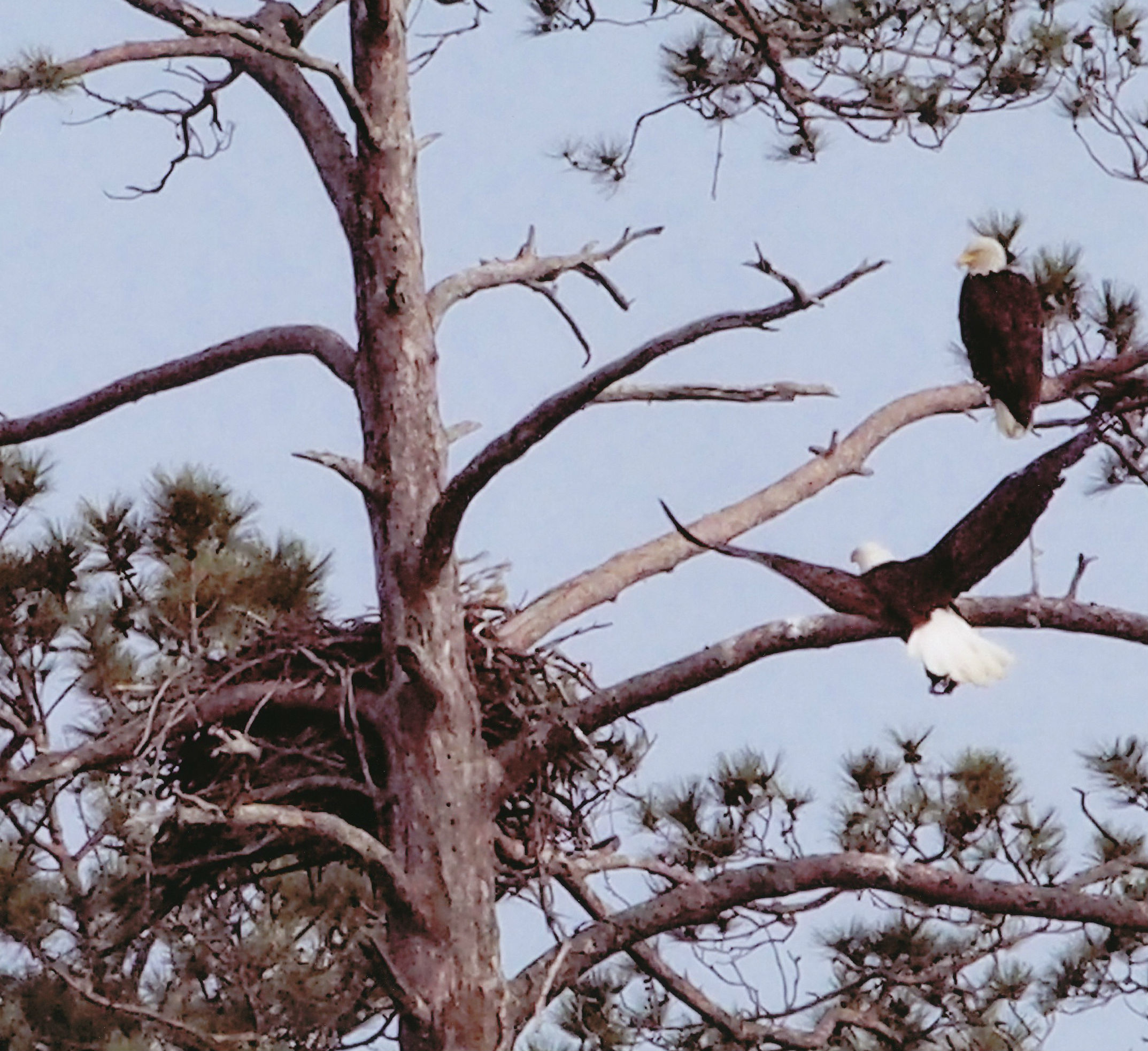 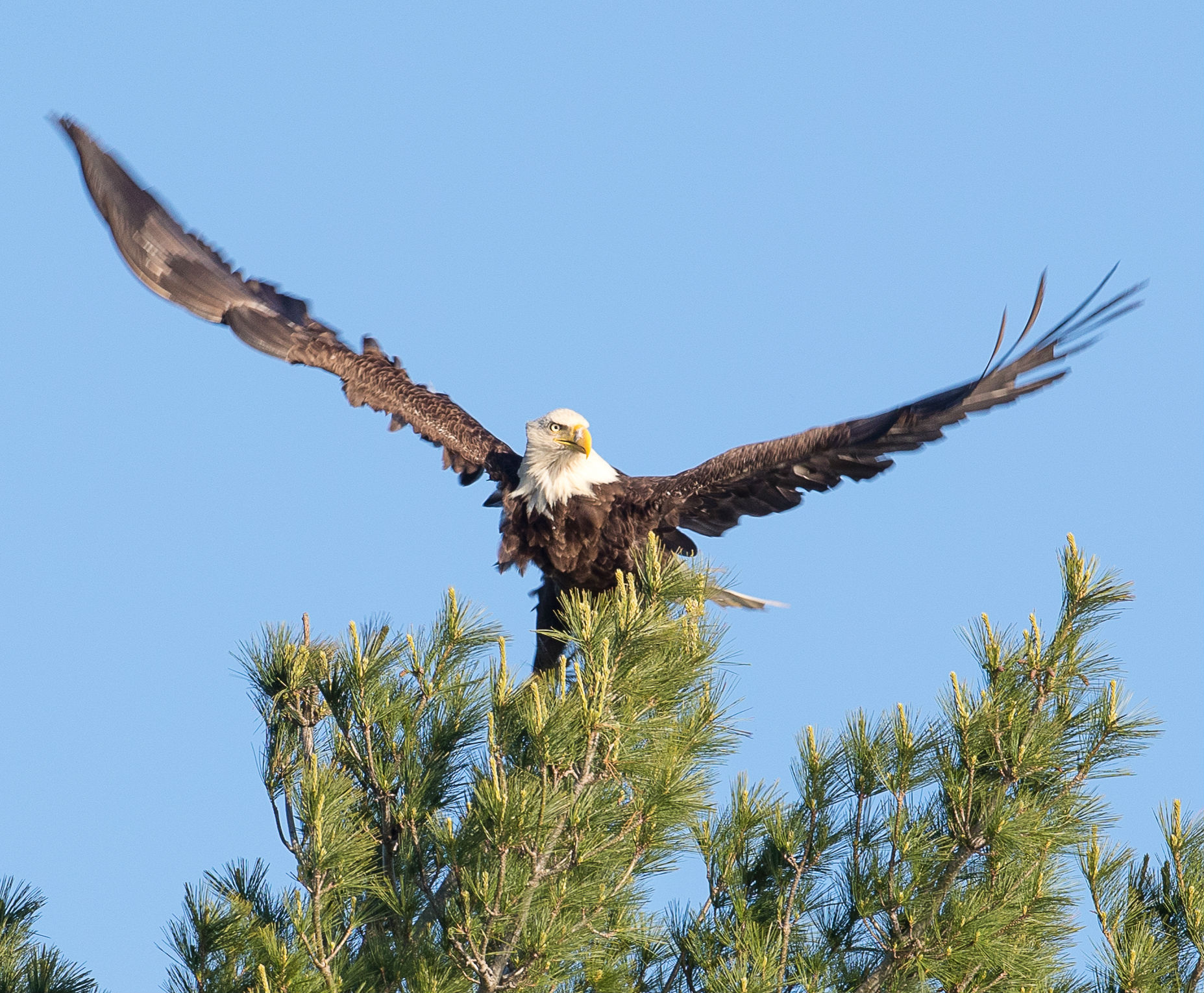 An adult bald eagle on top of a pine tree, courtesy of Kurt Affholter. 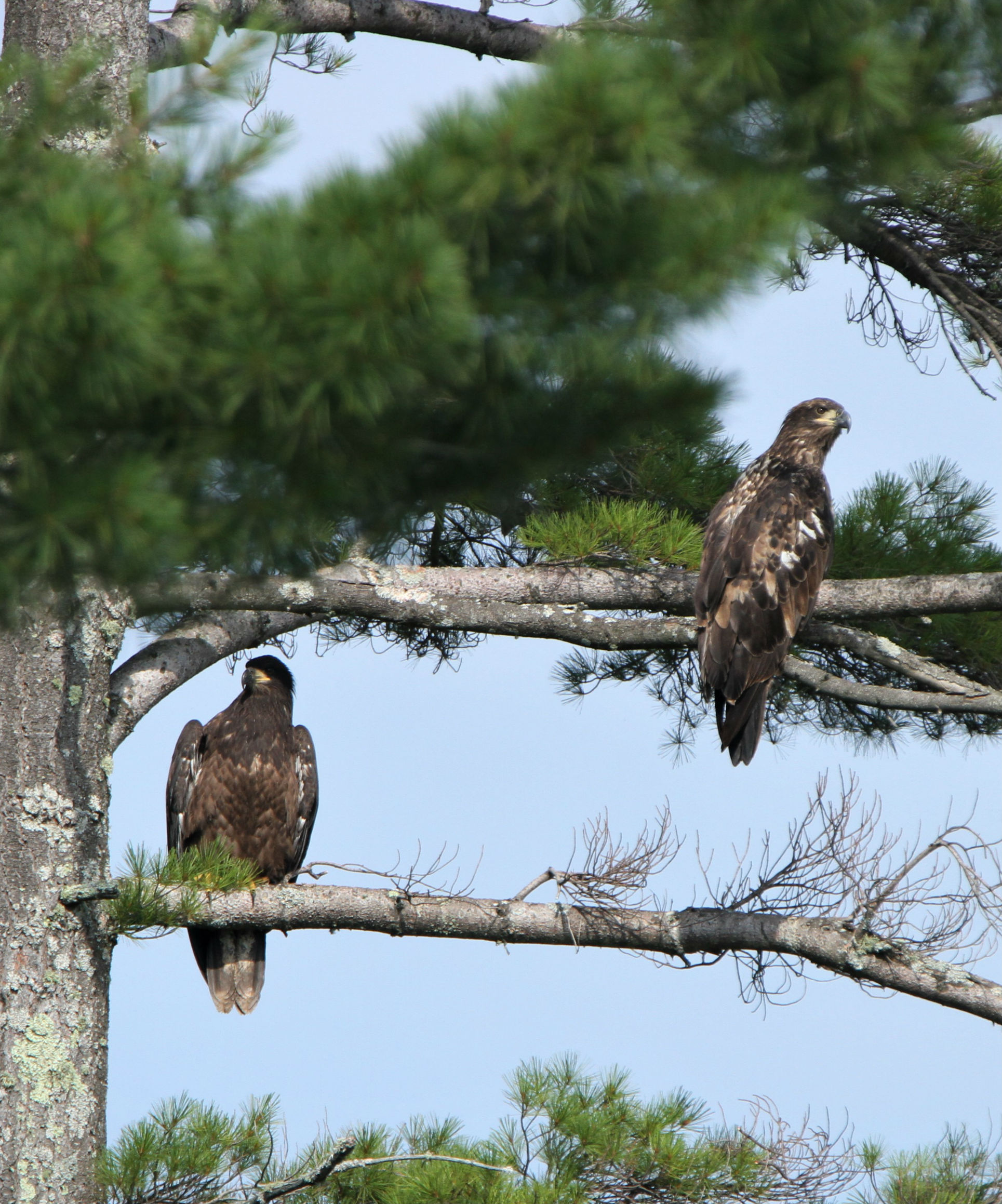 You may be in the presence of our nation’s symbol, or at least its nest. Can you see it? Look out across the pool. There are several bald eagle’s nests located throughout the refuge property, including this one. If you look out over the pool you can locate the nest about 1/3 of the way down on one of the tallest pine trees. There is a slight break in the tree branches and the nest is right next to the tree trunk.

Starting as early as March, eagles in our area begin nest construction or make repairs to the previous year’s nest. One to three eggs, which resemble huge white chicken eggs, may be laid in April and have likely hatched by the time the Marshland Wildlife Drive opens in the spring. Once hatched, you may see one or both of the parents tending to the chicks or the chicks sitting in the nest. In mid to late July, the chicks begin flight preparations by sitting on the edge of the nest and flapping their wings or taking their first tentative flights between the branches of the nesting tree.

For the remainder of the season the nest may sit empty or the eagles may visit between forays out searching for food. Many times the family will remain in the area late into the season before departing for open water once the pools freeze over. Scan for them sitting in the trees along edges – edges of pools, edges of roads, or edges of open fields. And watch as they can often be spotted flying high in the sky.

Do you know how to tell an adult form a juvenile? Bald eagles only get their white head and tail once they become sexually mature at about the age of 5 1/2. Before that they are mostly brown with streaks of white. So, if you see the family it should be easy to tell the parents from the chicks. However, telling male from female is more difficult. You may notice that one of the eagles is slightly larger than the other. Unlike people, the female bald eagle is most often larger than the male.

If you see a bald eagle watch closely, you may see it call. If it does, you may be surprised to find that the sound emanating from its beak sounds nothing like the call you hear on TV or in the movies. Hollywood doesn’t think the eagle’s call is majestic enough, so it borrows the call of the red-tailed hawk. Play the red-tailed hawk call here. This is the sound most of us associate with the eagle but in reality the calls are drastically different.

In comparison the sound eagles make more closely resemble that of a gull, like this herring gull. Play the herring gull call here. Now let’s listen to what a bald eagle actually sounds like. Play the bald eagle call here. Did you hear its nasal, cackling cry? What do you think? Do you think Hollywood had a point? Or should it have left the natural call?

While on the refuge you may also witness bald eagles feeding. Bald eagles seem to prefer fish, but why waste a bunch of energy catching food for yourself when you can steal it from others? Eagles are opportunistic and take advantage of other animal’s fishing prowess. Eagles will often “pirate” or steal fish from osprey. They also tend to eat young, sick or injured birds. In an effort to protect their chicks, you may hear a family of loons calling to each other in the presence of an eagle. In the spring, staff and visitors alike have seen eagles prey on unwary cygnets, or young swans, in our pool system.

Once staff members even snapped a photo of an eagle catching and eating an adult common merganser. The duck was so heavy the eagle couldn’t take off so it used its powerful wings to paddle to an island before it could eat its feast. Muskrats, beaver kits, snakes, frogs, and other small animals make up a portion of their diet as well. It is not uncommon to see this majestic bird scavenging roadkill. So be wary if you see one feeding on the roadside. They take a while to fly off and as a result may end up as roadkill themselves. So, if you see one feeding along a road, slow down and watch as it struggles for takeoff.